Cocos island (also called Isla del Coco in the native tongue of Costa Rica), is located in the Pacific Ocean, approximately 550 km from the Pacific shore of Costa Rica. It is an island declared as a Costa Rican National Park off the shore of Costa Rica since 1978. Surrounded by deep waters with counter-currents, Cocos Island is admired by scuba divers for its populations of hammerhead sharks, rays, dolphins and other large marine species which are very abundant in this unique meeting point between deep and shallow waters.

Cocos island is not allow inhabitants other than Costa Rican Park Rangers. Tourists and ship crew members are allowed ashore only with permission of island rangers, and are not permitted to camp, stay overnight or collect any minerals from the island. The famous oceanographer Jacques Cousteau visited the island several times and in 1994 called it "the most beautiful island in the world". These numerous accolades highlight the urgent need to protect Cocos Island and surrounding waters from illegal large-scale fishing, poaching and other threats.

Cocos island is completely surrounded by deep water with ‘counter currents’. The counter currents or Equatorial counter current is a surface current which is driven by strong winds towards the eastern directions. These currents are native to the Atlantic, Indian and Pacific Oceans. This current flows west to east, guided by the strong winds of the area.

For divers, the top reason for the fame of Cocos Island is because of the wide range of ocean life present in the surrounding waters: the largest schools of hammerhead sharks in the World are consistently reported there. Encounters with dozens if not hundreds of these and other large animals are nearly certain in every dive, from 5m to 40m; there are also different species of rays and dolphins along with some types of whales, and lots of different shareks such as: silky sharks, white tips, silver tips, Galapago sharks, tiger sharks... Most expert divers consider Cocos Island as a "must do in a lifetime" destination. It can only be reachable by liveaboards.

In September 2016, Dive and Cruise and some of our beloved divers finally made our way to it! We were onboard with Okeanos Aggressor 2 during 10 - 20 September 2016, and here is a video trailer for our trip (full version will come soon):

TRAILER - Coco’s Adventure, Sep 2016 from Dive and Cruise on Vimeo.

12 of us arrived in San Jose in early September from all over the world, after spending a few nights at the Holiday Inn Express Forum - which is also Aggressor Fleet's pickup hotel in San Jose.

On 10th September, all of us and the other 10 divers were transported by a bus provided by Aggressor Fleet to Puntarenas to board the Okeanos Aggressor 2, it was about 2.5 hrs ride. After that, we were set out for the 38 hours crossing to the amazing Cocos Island...

(You don't need to pack seasick pills, as it's provided onboard free of charge)

Every dive liveaboard that goes to Cocos Island follows a strict dive planning provided by the Cocos Island park rangers, includes the exact dive schedule for each boat, and the exact dive sites each boat are allowed to dive. As a result, most likely you won't meet any other divers from another boat during the time in Cocos Island, but it also has its con piont: neither the cruise director nor guests can have the flexibilty to change the dive planning ;-(

However, Okeanos Aggressor 2 did the best they could to plan the 2 pangas for either dive times or different dive sites to avoid congestion underwater during our week. And the most important - we didn't miss anything at all.

All diving were done with a back-roll, the water entries were usually negative due to the surface conditions and proximity to the rockiness of the dive site. The water temperatures during our trip was between 25°C to 26°C, due to the thermocline, soemtimes it can drop down to 22°C!! So, if you ever consider to book a trip to Cocos Island, the best is to bring a 5mm suit with hood and gloves. Don't feel sad yet, because these thermoclines is actually what makes exceptionally stable good diving on the island, it maintains permanent schools of hammerheads throughout the year.

Diving around the Cocos Island requires an advanced level of expertise, with experience in night diving, drift diving and diving from a zodiac. Many of the dives performed in the island were between 25 and 35 meters, It is highly recommended to dive with Nitrox. For the diving season, officially, there is no one season better than another, but rather, depends on the water temperature and thermoclines. Although Our friend - Lucas, an Italian diver who has been to Cocos for more than 8 times told us that for the marine life and diving, the best season for him is always in September.

During our week, we did encounter with dozens of hammerheads on nearly every dive, especially at Manuelita, Alcyone. And we also we also met some Galapagos sharks but not in large numbers, the highlight was few encounter with few different tiger sharks, some are fat boy monsters, and one even with a broken tips. The night dives were A.M.A.Z.I.N.G! With countless white-tip sharks hunting all over us, that was definitely one of the best night dives. And we also encounters with large schools of jacks.... Cocos is truly the top!

Here are the dive sites we visited duirng our week in the Isla del Coco :

Chatham Bay
We did our "check dive" and night dives there, it's located southeast of Manuelita dive site, this site provides a variety of marine life including frog fish, lobsters, morays, rays, white tip sharks (lots of them during the night dive, definitely one of the most exciting night dive!! You will love it), and of course the hammerheads.

Alcyone
Alcyone is an underwater rock that rises from a sandy bottom at 46m depth. The peak is located at 25m below water surface and it is sliced with various canyons. This place is considered a key point during the migration of fish species. At the very beginning of the dive, the predators escape in various directions, but then they start showing interest to the divers and come closer. Finally, after fish become brave enough, they swim above the divers’ heads like a squadron of bombers.

We encounter with dozens of hammerheads at this dive site every time we visit, the hammerheads are all over us during the dives when we stand/sat behind the rocks, this dive site is a submerged mountain, very special. And the hammerheads covered the whole panorama view into a deep blue wall of water. And we also encounter a few tiger sharks here, A must visit dive site! Due to strong currents the descending and ascending are conducted by using a descended rope.

Manuelita
Manuelita is located at the northeast corner of Cocos Island. It's a very attractive and exciting site indeed. Western and eastern hills are slope, while at the inner southern side there is a blossoming coral garden of yellow and orange hard corals. During the day it was calmer here, although after the dawn it became the shark kingdom.

Another great spot for schooling hammerheads action, we encounter large school of hammerheads every time we went there. The hammerheads were circling all around us during the entire dive, from shallow to deep and deep to shallow, the hammerheads love using the channel and the school were moving into the channel then back to the reefs, they were an organized school and divers can easily spot some hammerhead with special behavior or tagged by the Marin Park Ranger. At this dive site, another best thing happend to us is we also encounter a few different sized tiger shark, and duirng our week, tiger sharks alwayas showed up at this dive site the most.

Dirty Rock
Dirty Rock is located near Wafer Bay, between Viking rock and Punta Maria. The place is represented with two little islands and a channel between them. Here, divers we met almost all the underwater dwellers of the Cocos Island: the big school of jacks, schools of Marble Rays and Hammerheads. The Jacks were all around the place and hammer shark was mainly around them near the pinnacle (top at 22m) that creates a little channel at the end of the main reef. Swimming among various fish is probably the most powerful experience that we got at the island.

Punta Maria
Punta Maria is located at the western part of the island, between Dirty Rock and Dos Amigos Grandes. It's an underwater peak with two tops at 22m and 25m and the bottom at 30m depth. Strong currents and amazing landscapes are characteristic for this dive site. We spotted some Galapagos sharks here, but during this time of the year, we couldn't have more than 10 to 15 specimen together. 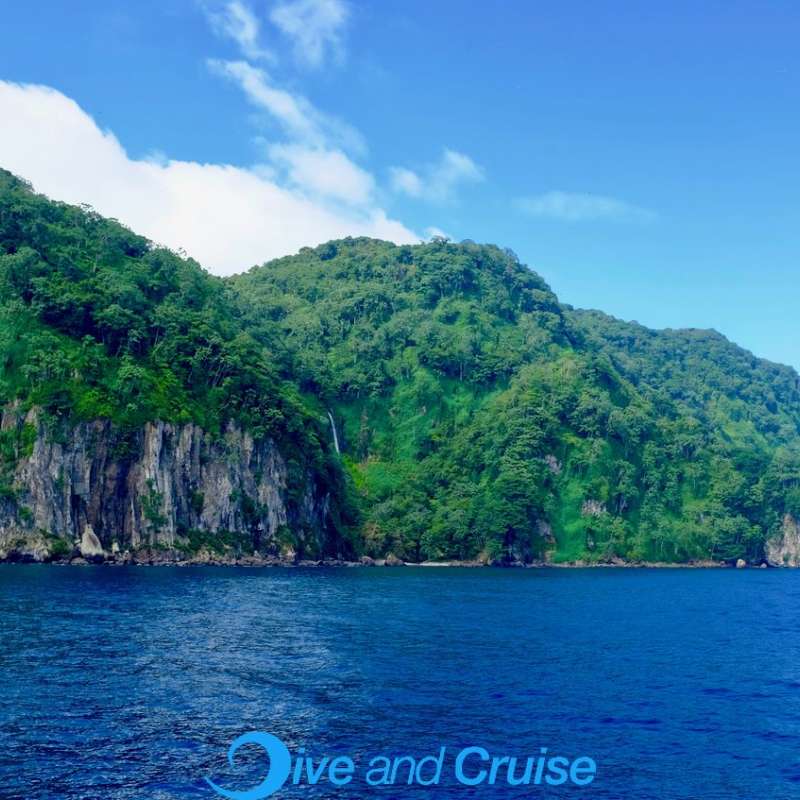 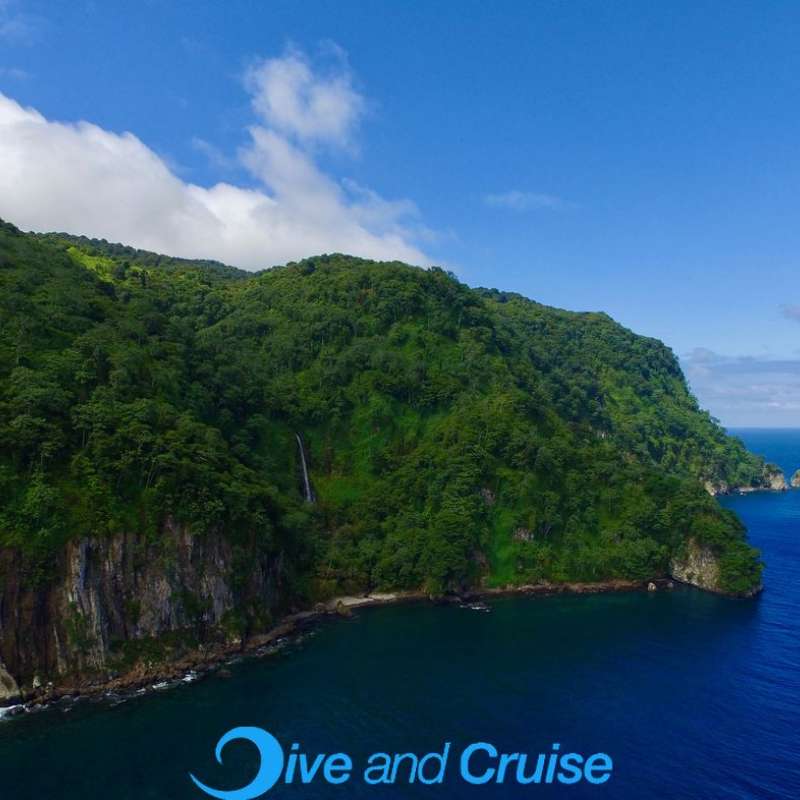 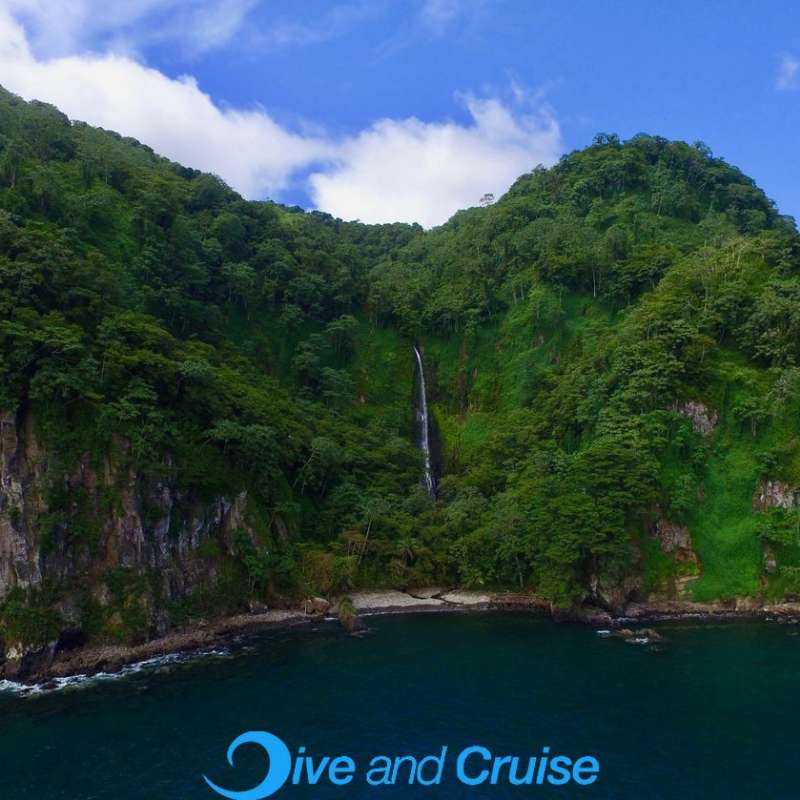 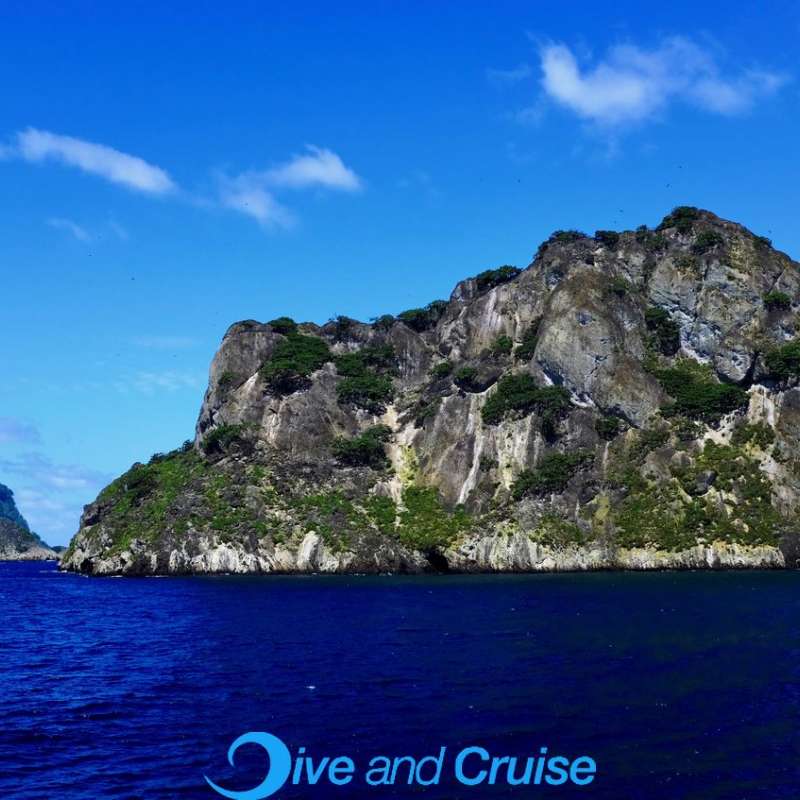 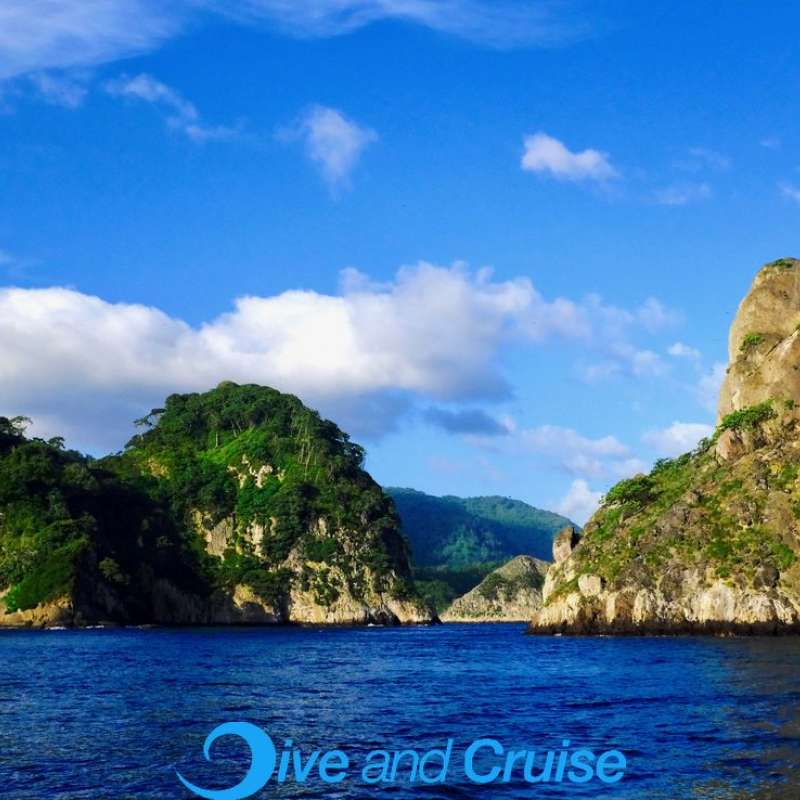 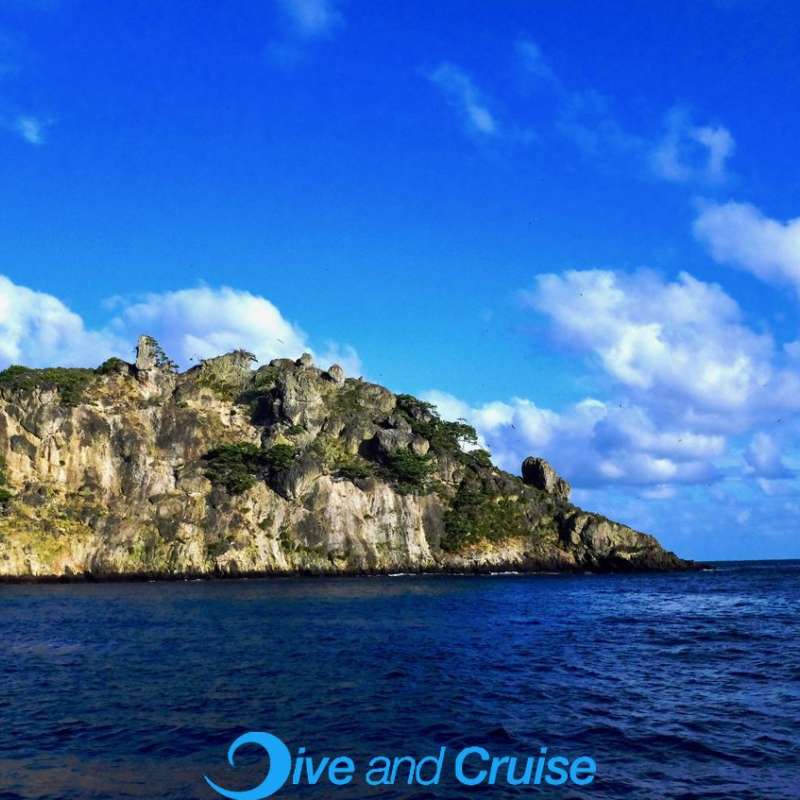 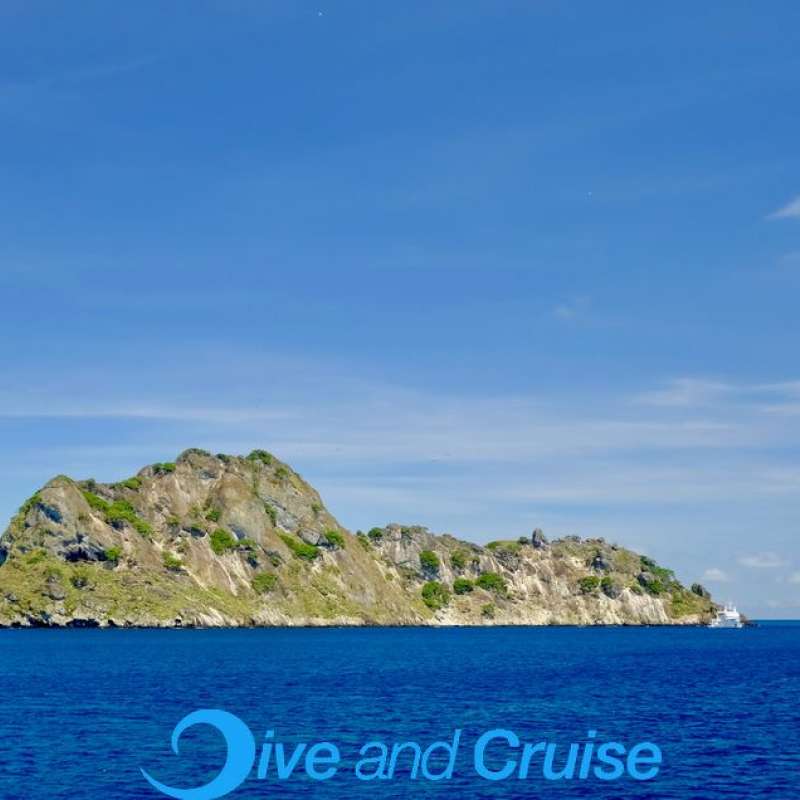 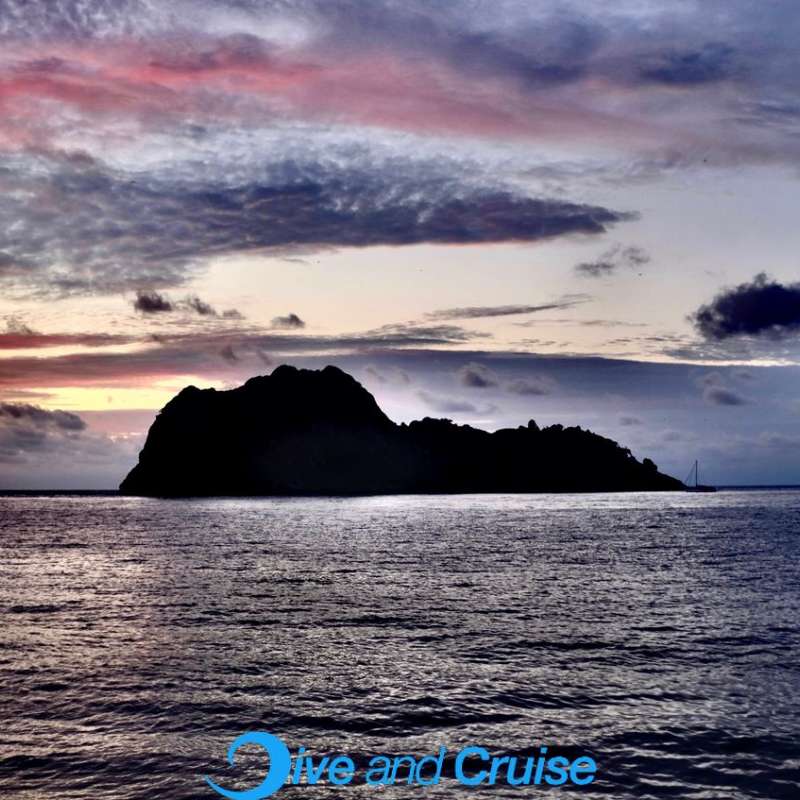 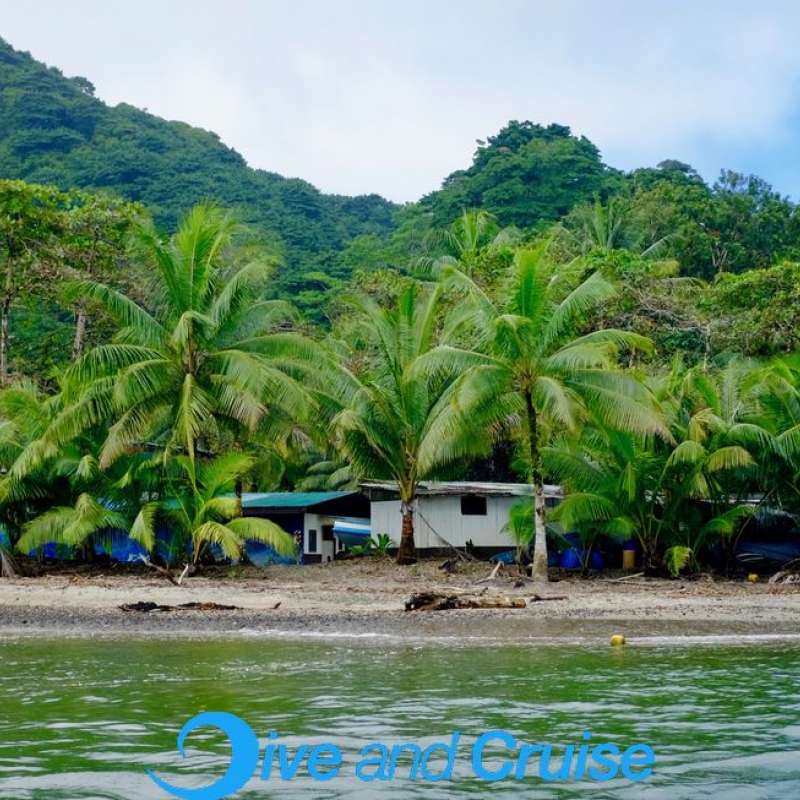 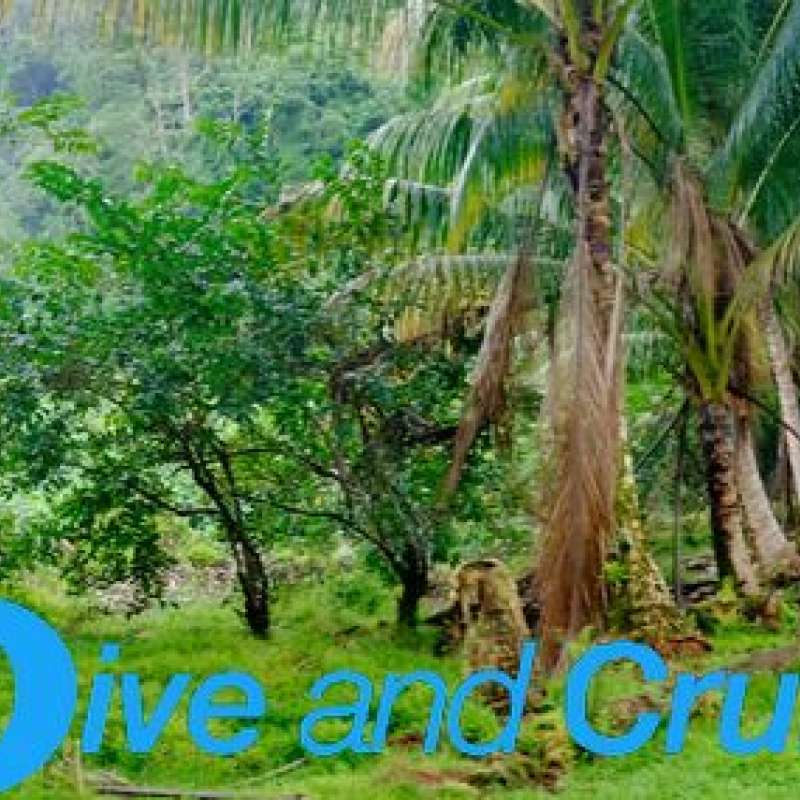 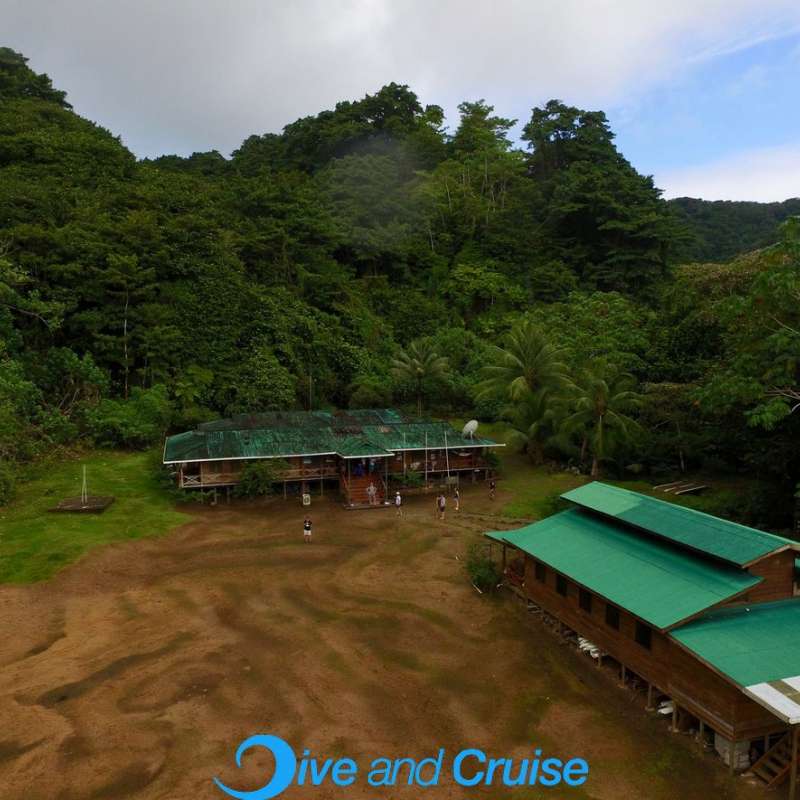 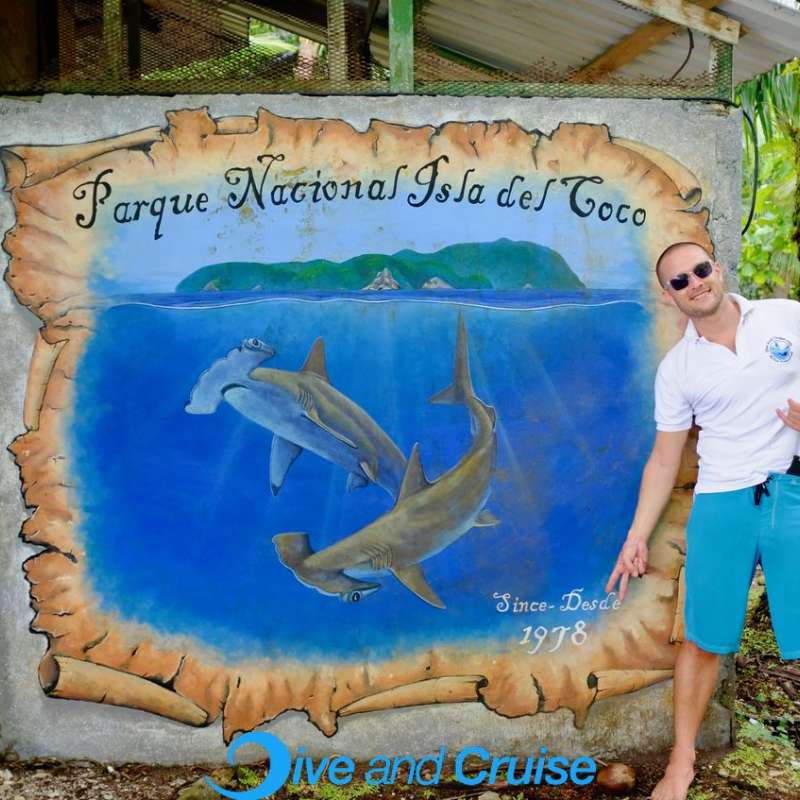 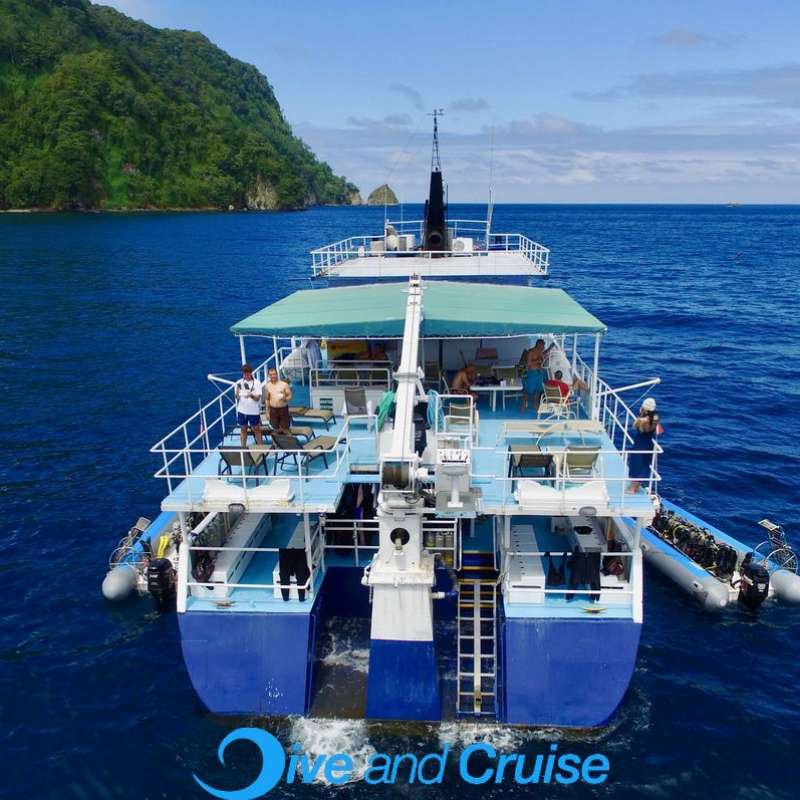 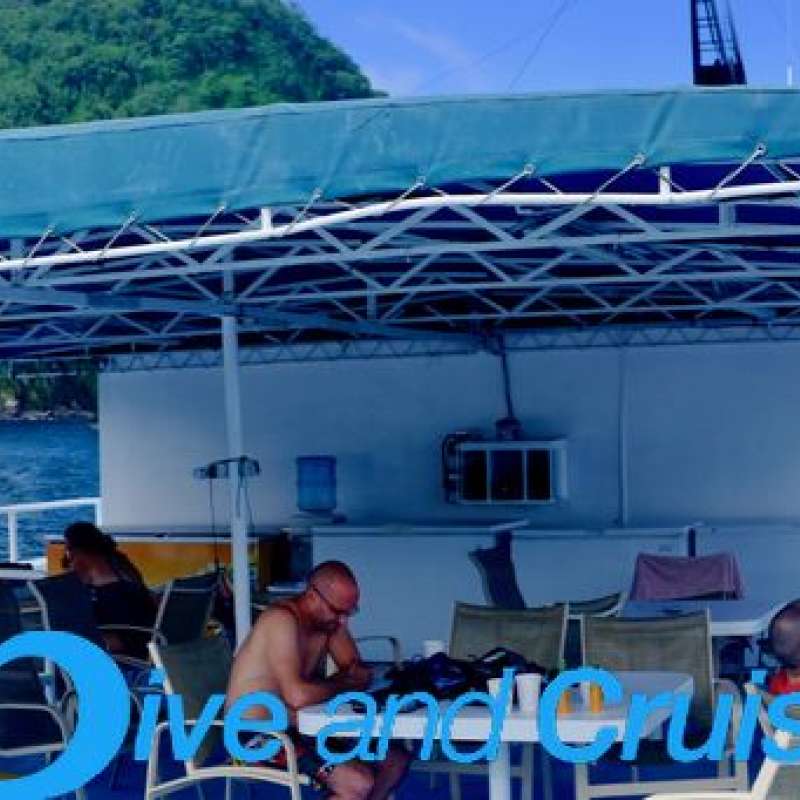 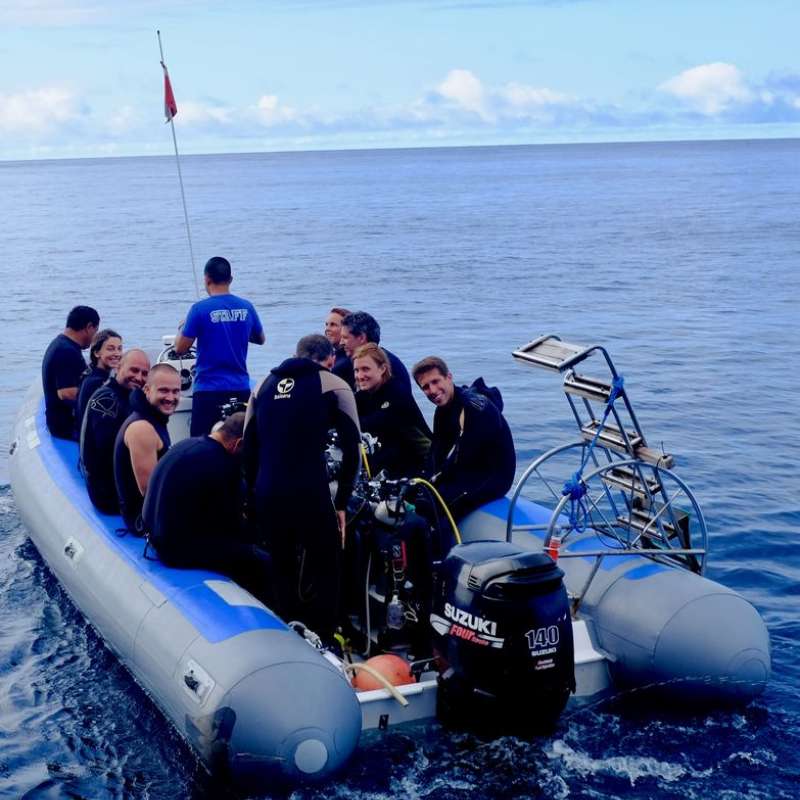 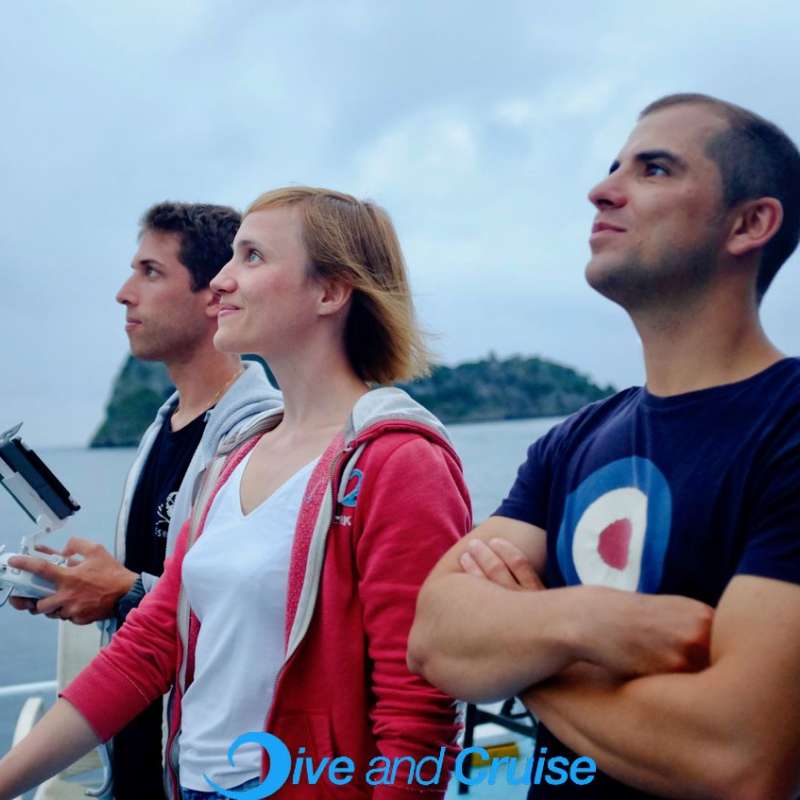 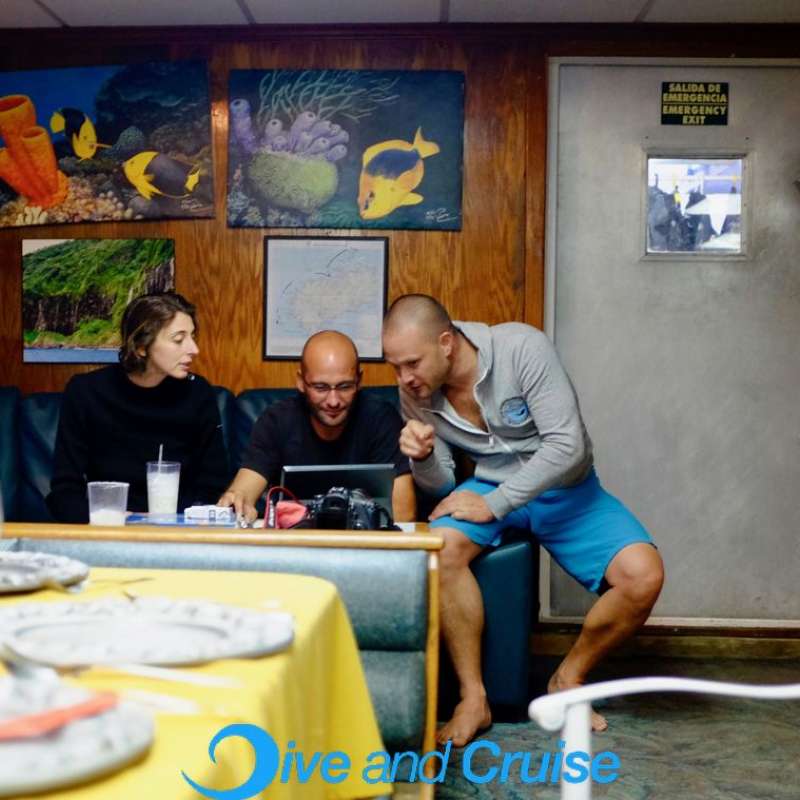 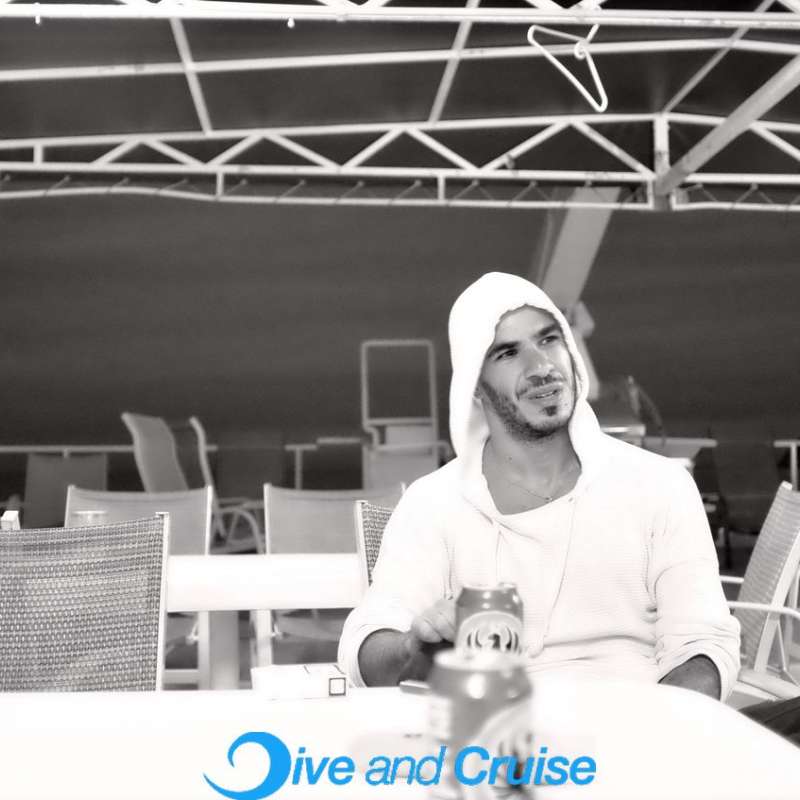 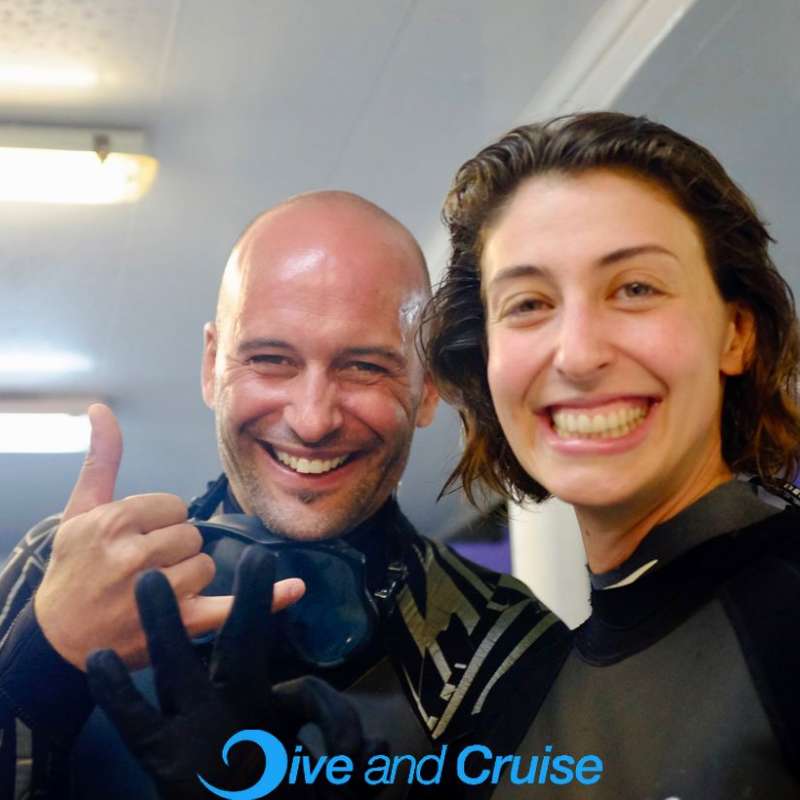 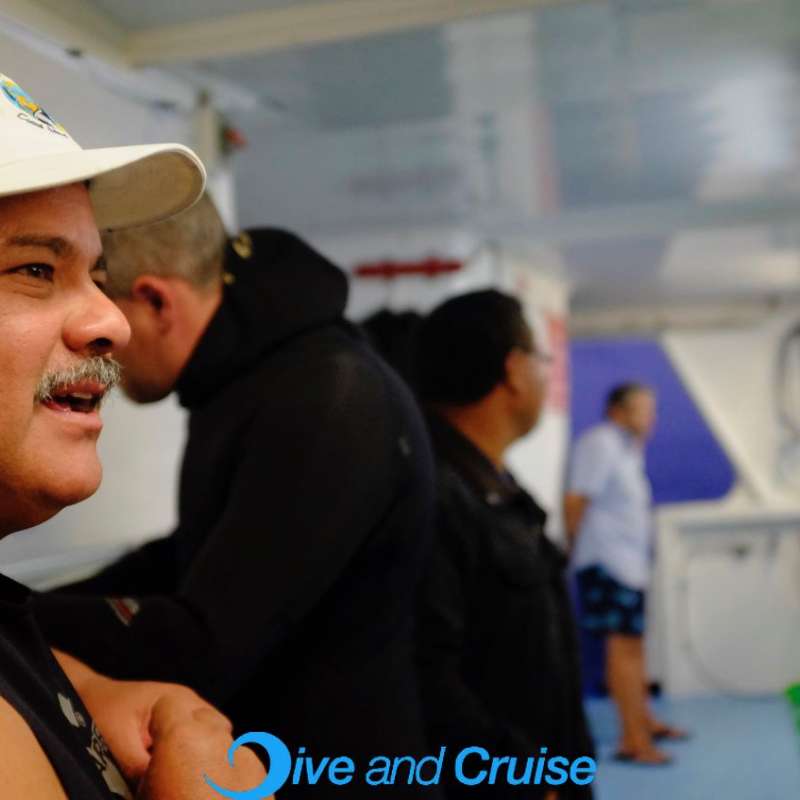 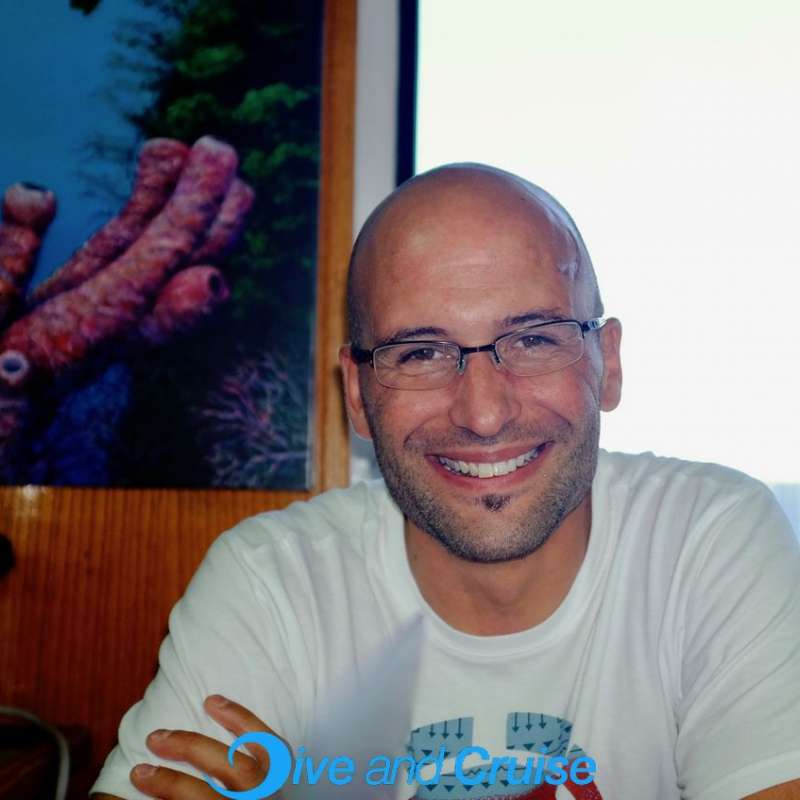 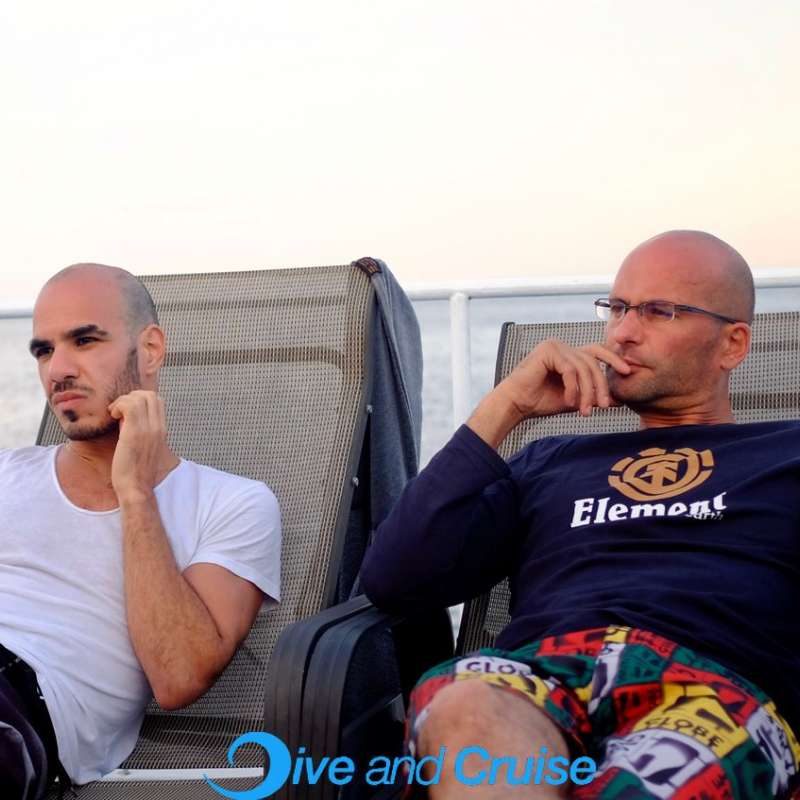 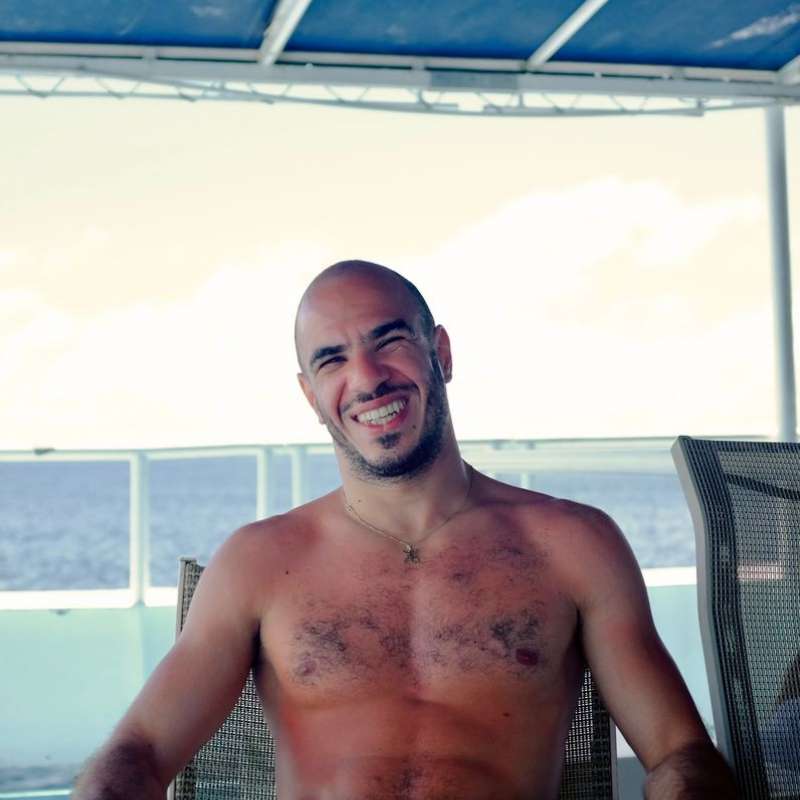 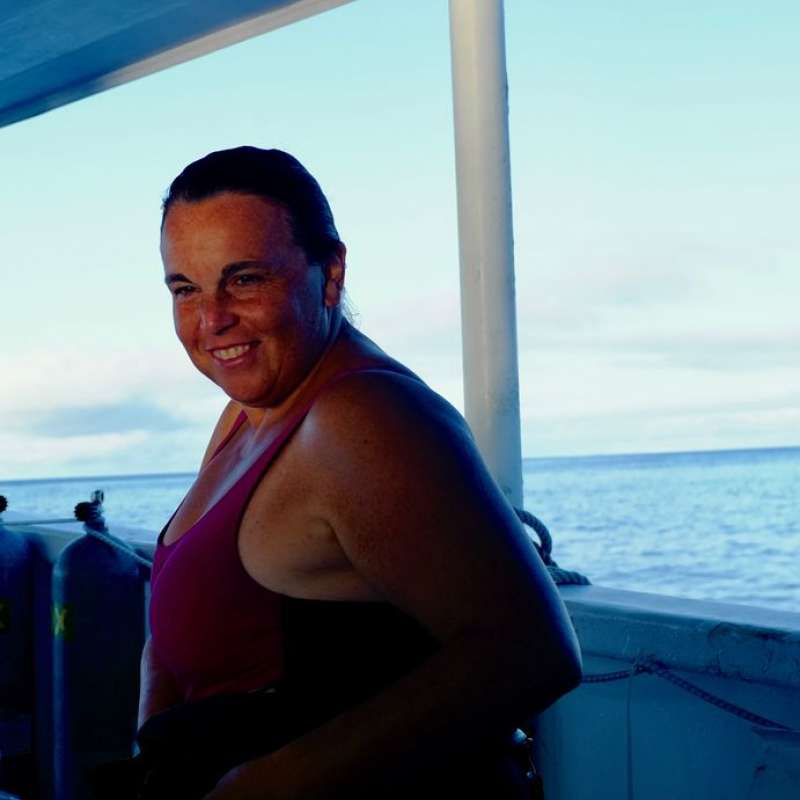