I just completed the Komodo trip, with the Dewi. Dive master Andrea was my Buddy. I was trying my best to stay for another trip didn't want to leave. We celebrated my 75th year, and 100th dive...

Raja Ampat is Dewi Nusantara’s home for the majority of the operating year. Our luxurious motor sailer will be plying the waters of this stunning National Park to bring you the very best of this unique and truly beautiful paradise to make your dive vacation dreams come true. Raja Ampat casts a spell on all who visit – scientists, photographers, novice divers and crusty sea-salts alike. This group of majestic islands, located in the northwestern tip of Indonesia’s Papuan “Bird’s Head Seascape” lies in the heart of the coral triangle, the most bio-diverse marine region on earth.

Dewi Nusantara's trip Starting and ending in Sorong, our 11-night cruises offer nine and a half days of spectacular and varied diving with between two and four dives per day with many fascinating land excursions along the way.

Cenderawasih, along with Raja Ampat and Triton Bay, makes up the Bird’s Head Seascape. Its reefs look nothing like Raja’s colorful, fish-filled reefs, nor are they similar to Triton Bay’s soft coral wonderland. Pristine and vast, the bay’s reef tops comprise some of healthiest hard coral gardens to be seen. Dramatic vertical walls with prolific sponge life abound on the outlying atolls, schooling fish along the reef points and ridges.

Dewi Nusantara's trip Starting and ending at Manokwari, our 11-night Cenderawasih Bay cruises o er nine and a half days of spectacular and varied diving, with between two and four dives per day and many fascinating land excursions along the way.

The Flores-Adonara-Solar-Lembata-Pantar-Alor island chain in Indonesia lies toward the eastern end of the long Nusa Tenggara archipelago, 160 nautical miles directly south of the large island of Sulawesi and 500 nautical miles east of Bali. These scenic and highly volcanic islands lie eight degrees below the equator and enjoy calm blue seas and warm sunny weather throughout most of the year.

During or operating year the magni cent Dewi Nusantara motor sailer visits the Flores and Alor region for selected cruises in this fascinating part of Indonesia to bring you the very best that this unusual and pristine region has to offer.

Our Flores and Alor cruises will start and nish in the harbour town of Maumere, north Flores, These 11-night cruises o er nine and a half days of spectacular and varied diving, with between two and four dives per day and many fascinating land excursions along the way.

Dewi Nusantara heads out on some unique dive cruises that take in several of Indonesia’s most colourful, interesting and diverse dive destinations; Buton, Wakatobi, Alor, Lembata and East Flores.

Taking up part of our operational year, Dewi Nusantara will be cruising and exploring the seas between Buton, south east Sulawesi to Maumere, on the north coast of Flores. These trips are scheduled to run one way from two di erent directions. Firstly, north to south from Baubau on the island of Buton, then to the Wakatobi region before crossing the Flores sea to visit Alor, Pantar and Lembata and nishing at Maumere in Flores. The other option runs south to north and starts in Maumere, reversing the rst route and nishing at Buton, ying home from Baubau.

The Moluccas, meaning in Arabic “Land of Many Kings”, or to give the region it’s modern name, Maluku, was the rst part of the Indonesian archipelago to capture the imagination of European mariners and explorers. The natural beauty of Maluku is a picture perfect vision of a desert island paradise: powder white beaches, clear blue waters and gently swaying coconut palms. However, it was not for this that the explorers came; it was for a treasure that held the highest prices in the European markets at the time: rare spices.

Covering a huge area and including the Banda Sea, the three major areas of Maluku Utara (north), Maluki Tengah (central) and Maluku Tenggara (south east) run along a north-west to south-east diagonal line from Halmahera, across Ambon and the Banda Sea, down to the Tanimbar and the Aru islands that lie off the west coast of the island of Papua - a stretch of over a thousand kilometres : Halmahera, Ambon, The Banda Sea, The Forgotten Islands.

Although rare, Dewi Nusantara will be making some trips that will be taking in some of the di erent areas of the Maluku region.

Welcome to Komodo, the “Land That Time Forgot”. Most world-class diving sites are usually formed by either unusual volcanic formations of undersea rock or extensive deposits of coral limestone, washed over by nutrient-rich marine currents. Dewi Nusantara will be visiting the fabled Komodo National Park and surrounding areas as part of our annual schedule.

Embarkation and Disembarkation times : Official embarkation time is 4pm. If you are arrive on an early ight you will be met at the airport and taken to a hotel for breakfast and co ee. We normally try to start boarding from 12 noon.

On the day of disembarkation, you will be transferred to the airport between 6:00 am and 10am. If your ight is later than this you will be taken to a hotel where you can purchase a drink and use the wifi and then 1.5 hours before your flight is due we will transfer you to the airport and assist you with check in.

I just completed the Komodo trip, with the Dewi. Dive master Andrea was my Buddy. I was trying my best to stay for another trip didn't want to leave. We celebrated my 75th year, and 100th dive width the WONDERFUL CREW. ANDREA and the crew helped me out when my deflater botton broke and the bcd was empty. They provided spare bcd, as mine couldn't repaired. My computer got out of gage mode (my fault) they had a spare that I could so I only missed one dive. I'll keep coming back Andrea and her great Crew are the best. 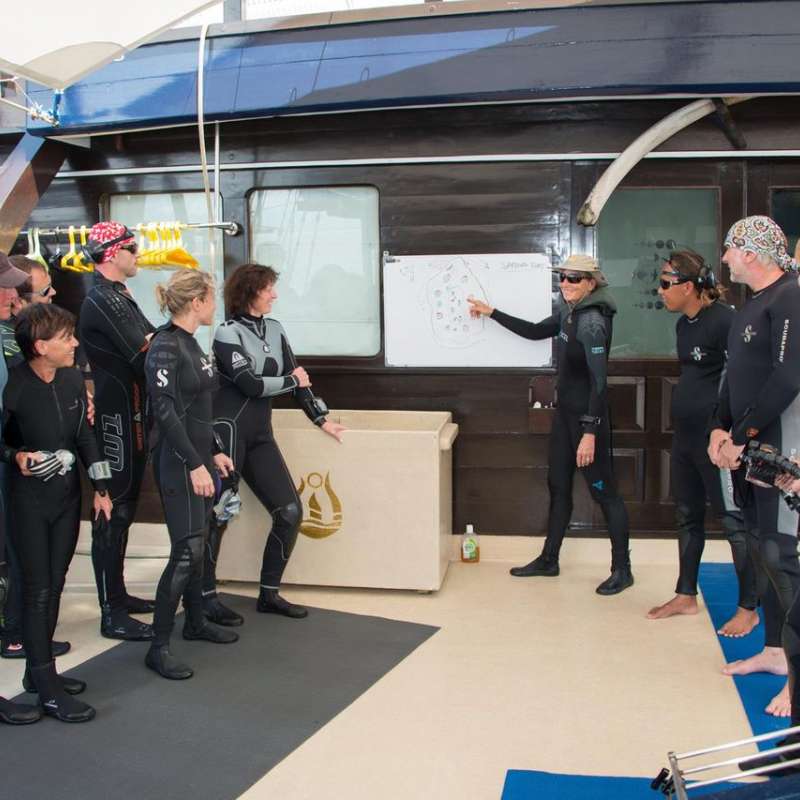 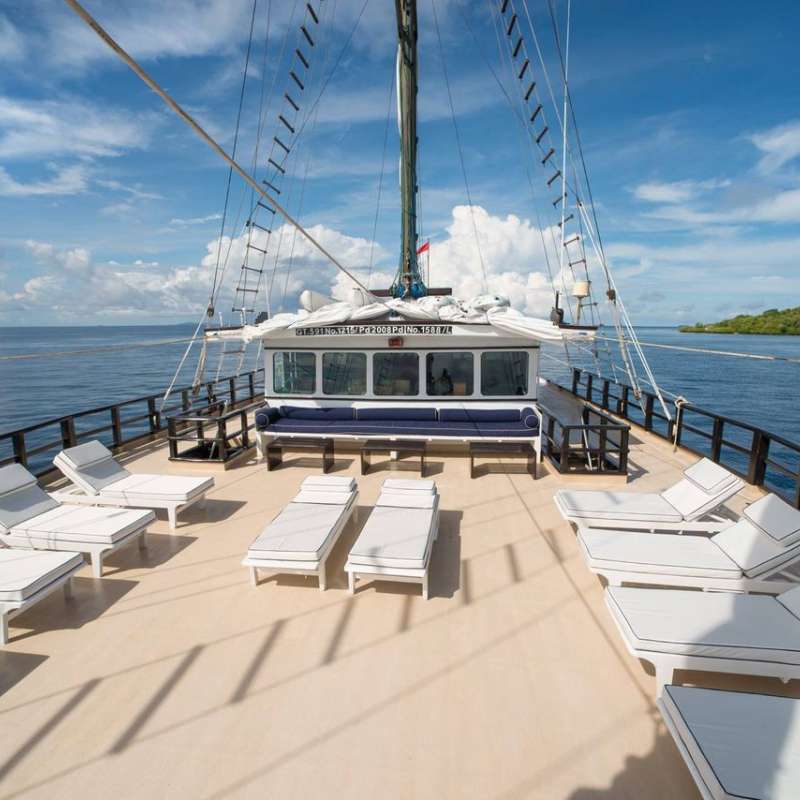 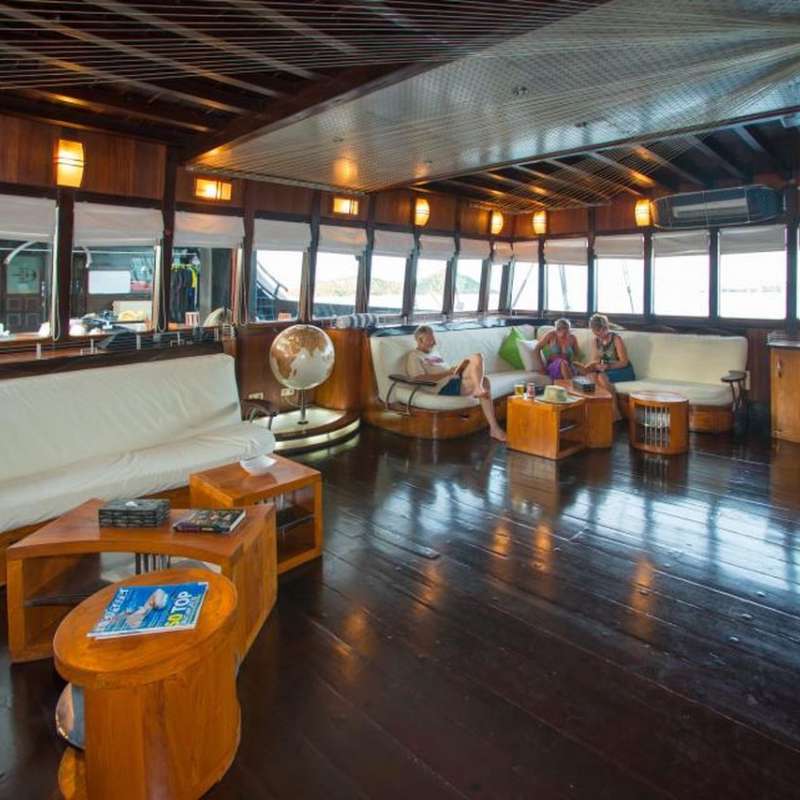